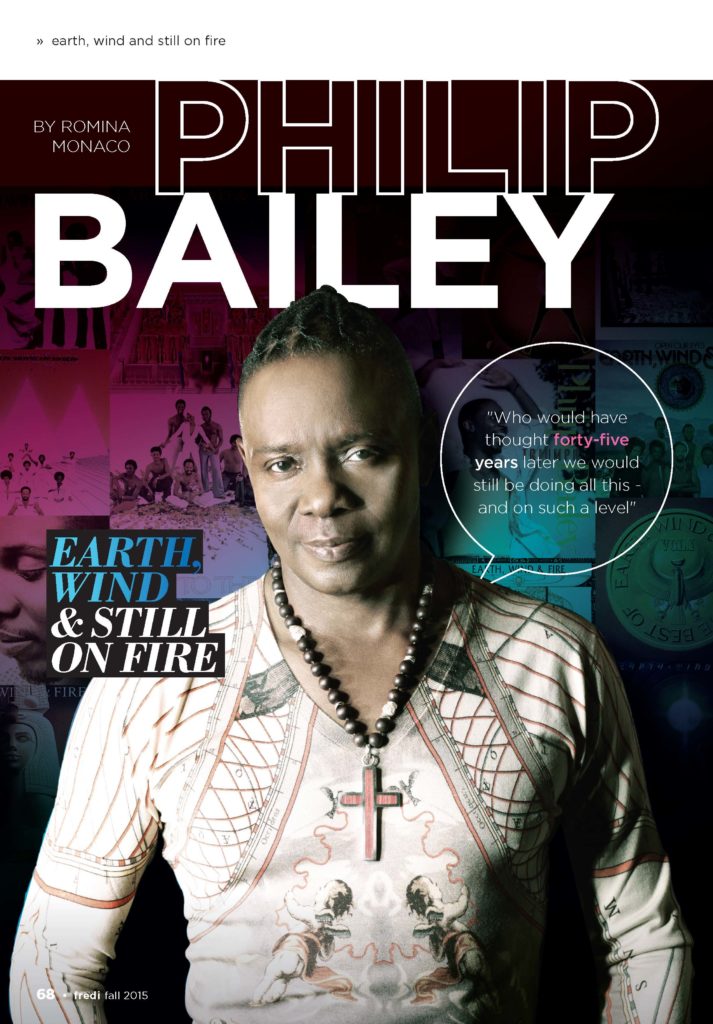 With a powerhouse endorsement by Quincy Jones who proclaimed himself as their number one fan to being commonly referred to as “The Black Beatles” by critics, there’s no question why Earth Wind & Fire is hailed one of the most influential musical forces of the 20th century. Boasting over 90 million recording sales, multiple Grammy and American Music Awards, an induction into the Rock and Roll Hall of Fame including a star on the Hollywood Walk of Fame, they are considered one of the greatest and most commercially popular bands in contemporary music history.

“I think of everything we’ve been really fortunate and blessed to do. It’s all been so fantastic.  Who would have thought forty-five years later we would still be doing all this – and on such a level,”says the band’s celebrated lead vocalist, Philip Bailey as he sits atop Toronto’s Molson Amphitheatre pointing to the fleet of EWF tour buses lining the parking lot below. Co-headlining alongside the equally-acclaimed group, Chicago, EWF makes a stop in the Big Smoke for a sold-out show on their North American “Heart and Soul” Tour. “It’s a fabulous tour, very high powered and well-accepted all over. We’re having a great time and between the two bands we have over forty top-ten records with songs, that after all these years have become a part of the DNA of a lot of people,” he tells Fredi Magazine.

Less than an hour later the magnetic, highly-charged sixty-four year-old, who has entertained everyone from American presidents and royalty to audiences worldwide, hits the stage with fellow EWF members Verdine White and Ralph Johnson and others, to pump out chart-topping smash hits as That’s the of Way of the World, Septemberand Shining Star.  Bailey’s signature falsetto combined with an array of instrumentals, electrifying costumes, funky dance moves and stage theatrics depicting mystical pyramids and the cosmos, thrills fans who sing along to their all-time favourites from the 70s and 80s.  Also on the repertoire are songs from their recent 2013 album, Now, Then & Forever.

“We try to give audiences the best shows we possibly can and continue to work on our craft.  They may not be aware of this but they feel the sincerity and effort we give every night,” explains Bailey who admits performing onstage still gives him the greatest satisfaction as an artist. “I’ve always been conscious of how to stay true to the vision that Maurice started with,” he adds.Founded in 1969 by musical genius Maurice White, who now takes a behind-the-scenes role due to a diagnosis of Parkinson’s Disease, EWF’s artistic brilliance is evident in their characteristic, spiritual compositions. “Writing a song is putting things in form and saying to people what they just can’t say for themselves.” From captivating lyrical hooks to the innovative melding of soul, blues, funk, rock, dance, jazz, African and Latin American the band’s astounding success lies in its ability to cross-over and appeal to a wide range of music lovers. They have inspired renowned artists as Prince, Beyonce and Bruno Mars and the vast sampling and remixing of EWF tracks by today’s young artists and deejays has sparked interest in a new generation.

Another component to EWF’s longevity has been their capacity to collaborate with a great number of industry professionals. “Collaboration brings a whole other element to the art. Working with people you really respect is an enriching experience and enlarges you as a person and as an artist. It’s a win-win for all parties”, explains Bailey, adding “It would be cool to do something with Sting. I’ve always had such respect for him.” He has partnered with the finest in the business such as Stevie Wonder, Little Richard and Dionne Warwick and has explored independent projects outside the group. Solo achievements include the 1984 certified-gold Chinese Wallalbum featuring itsglobal hit duet single with Phil Collins – Easy Lover, four gospel records, as well as the Grammy-winning Triumphalbum released in 1986.

According to the man dubbed by his peers as “The Voice”, a rich and fulfilling career isn’t enough.”More important things take precedence. It’s not just what you do and how you’re remembered but also the contributions you make to society. We should be conscious of the fact that we contribute every day by just making positive choices and treating people right.  And as an artist you have to find a reason to do your art that’s broader than just your own self interest,” he explains. With a compelling need to give back he created the Music is Unity Foundation in support of displaced and at-risk youth exiting foster-care. Raising awareness as well as funds to assist those working with young individuals, he also gives encouragement by inviting beneficiaries to meet and experience EWF while on tour. Other than sending messages of love and consciousness through music and charitable endeavours it is by far his personal life that takes centre-stage. As a father of seven, two of whom work with him as vocalist and managing assistant, and grandfather Bailey feels the greatest legacy he will leave behind will be the one to his family. “I’d like them to know that I did the best that I can do. That I was the best father, friend and husband that I could possibly be…who just happened to be a great musician.” What about the future of EWF and what can the millions of fans expect? “We’re always moving ahead and looking forward,” he says and then with a twinkle in his eye the legendary performer smiles, “I do believe the best is yet to come.”