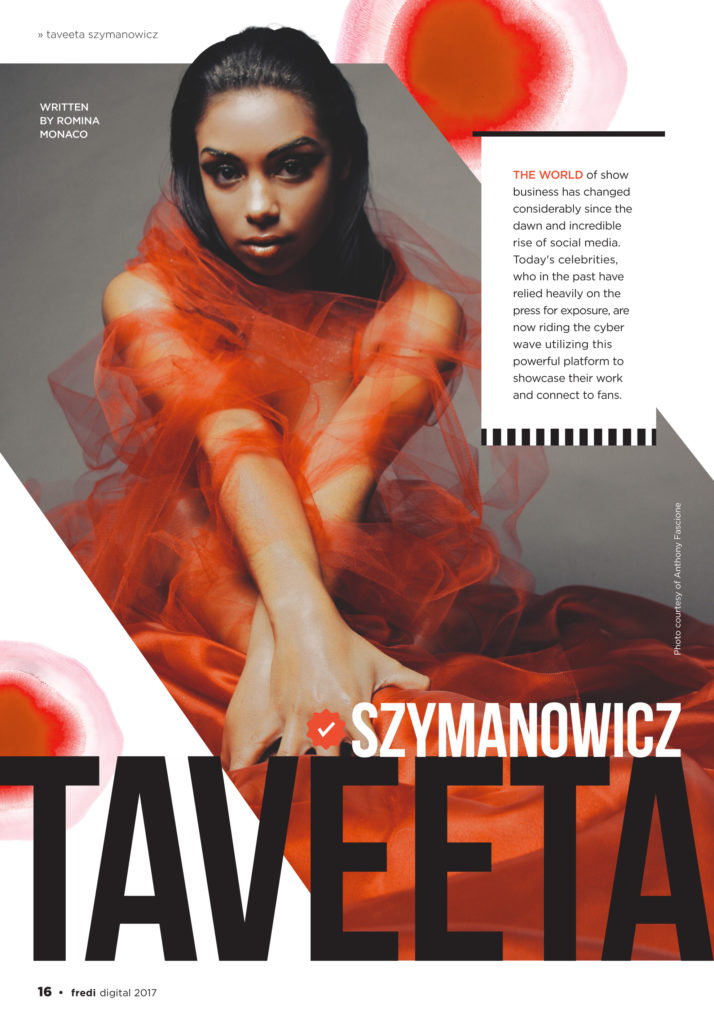 The world of show business has changed considerably since the dawn and incredible rise of social media and today’s celebrities, who in the past have relied heavily on the press for exposure, are now riding the cyber wave utilizing this powerful platform to showcase their work and connect to fans.  One entertainer who is benefitting from this tool and using it to its fullest potential is multi-talented Taveeta Szymanowicz, widely known to her fans simply as Taveeta. Crediting her popularity to her television characters on the hit teen series’, The Next Stepand Make It Pop, her on-line presence captivates young audiences nationally and across the globe.

Toronto-born and only 21 years old, the spirited actress, singer, song writer and dance artist is already well-accomplished. “I started dancing when I was six. I was super hyperactive! I stopped for a couple of years, did sports instead and then went into jazz class,” explains Taveeta. “From there I was instantly hooked and trained excessively.” Her love of dance eventually led to her to Toronto’s Cardinal Academy of Arts where she delved into all spectrums of the performing arts, collaborating with fellow students and mentors who would help hone her skills as a multi-genre entertainer. “I’d be walking the halls and there would be singers hanging out and singing at the top of their lungs…both musicians and actors.  It was really nice and motivated me to try other things,” she says, describing what could easily be a scene in the 80s art school film, Fame.

Inspired by her surroundings Taveeta graduated with honours, subsequently auditioning for the acclaimed Canadian series, The Next Stepwith hopes of scoring a dance role on at least one episode. Instead, her wildest dreams were realized when, only after her very first-ever audition in the entertainment industry she landed the principle role of Thalia. “It was actually through word of mouth that I learned about the audition and from there I knew that I loved being behind the camera. It felt normal and I was not really all that nervous,” she smiles remembering the pivotal moment in 2014 that would put her face on the Family Channel and on television screens nationwide. A rising star, it didn’t take Taveeta long to hit the US market after acquiring the role of “mean girl” Valerie in the world-renowned Nickelodeon television series, Make It Pop. “I auditioned for that and it was so much fun because it was completely different from my character in The Next Step. Valerie was mean and a Queen Bee. I thought, ‘this is fun. I get to be someone completely different’,” she laughs. Going above and beyond is her mantra and therefore no surprise that in addition to the tube, she also graces the big screen starring in the recently filmed Every Day, as well as appearing regularly in the musical productions of Peter Panand Sleeping Beautyat Toronto’s Elgin Winter Garden Theatre.

Yet the tides have turned once again and today her passion for music has sparked the recent release of her debut album, Resurrection, with a goal to one day collaborate with artists such as Drake, The Weekend, Alessia Cara and many more. “I’ve wanted to make music for so long and finally I’m in a place now where I can,” says Taveeta whose independent EP can be found on iTunes and Spotify. “It’s so much fun. I sit with my producers at Gladiator Records and tell them all my ideas and all the things I want to communicate. We write to different types of music and because I’m a person of diversity I am into so many different types of music,” explains the exotic brunette of Polish and St. Lucian descent. As a musical artist Taveeta understands that the vehicle which showcased her talents as an actress, that being television, does not apply for the “up-and-coming” of the music realm and now takes advantage of the power of social media to promote Resurrection and its videos to her vast fan base. “The two shows definitely helped me to acquire a fan base and it’s so interesting because they are pre-teens and teens and now that I’m growing up, they are growing up with me. They are sticking by me and supporting my other endeavours,” says Taveeta, adding that she handles her own Instagram, SnapChat, Facebook and Twitter accounts, taking the time to respond to her young fans and followers.  “People will take time out of their day to make me a collage or take my song and put it over a picture of me dancing and I think, ‘that’s so nice. Thank you for doing that!” So I try to respond as much as I can,” Her appreciation is unquestionable and considering she has 150k plus loyal followers with thousands reacting to each of her posts, this by no means an easy task.

Equally important is her commitment to being a positive role model for her generation and does so by using social media as a force for good. “I would never post anything that wasn’t appropriate and being a good role model is another driving force into all that I am doing. So I use my platform to have a voice and communicate my thoughts to people in hopes that it will make a positive impact.” But what does Taveeta say of its negative implications?  “I feel social media puts a lot of pressure on society. There’s pressure to look a certain way and that can get to anybody. So I try not to focus on that as I see what that does to some artists.” Marching to the beat of her own drum, she doesn’t abide by social media statistics indicating the “dos and don’ts” regarding engagement levels. “I post when I post and when I feel like it…and only if feel a connection to the photo.”  Instead of creating an illusion to hide what many celebrities may consider banal reality and threat to their mystique, Taveeta prefers to get real and personal opening the door to her fans and allowing them to see her at home reading a book, on a summer hike or a wishing a close friend a happy birthday.  “Just be safe about it because so many people can see what you’re doing and you’re making your life public. Be smart about what you are sharing.”  Although using it as a means of self expression with an understanding of how it benefits her career, Taveeta feels social media will not make or break an artist. “If you create a great song and people like it they will share it. Social media didn’t exist in the past but artists still succeeded. At the end of the day it comes down to your hard work. ”

Dr. Pimple Popper – a dermologist and her page is so cool. MY favourite artist to follow is Selena Gomez. I love her and she is inspiration to me.

Which emoji do you use most?

What’s your favourite restaurant to eat in Toronto?

What’s the last book you read?

Every Day because I have role in the live action movie!

What TV show are you hooked on?

When you were a kid, what did you want to be when you grew up?

What was the last song that was stuck in your head?

Believe in the power of focusing on what you love