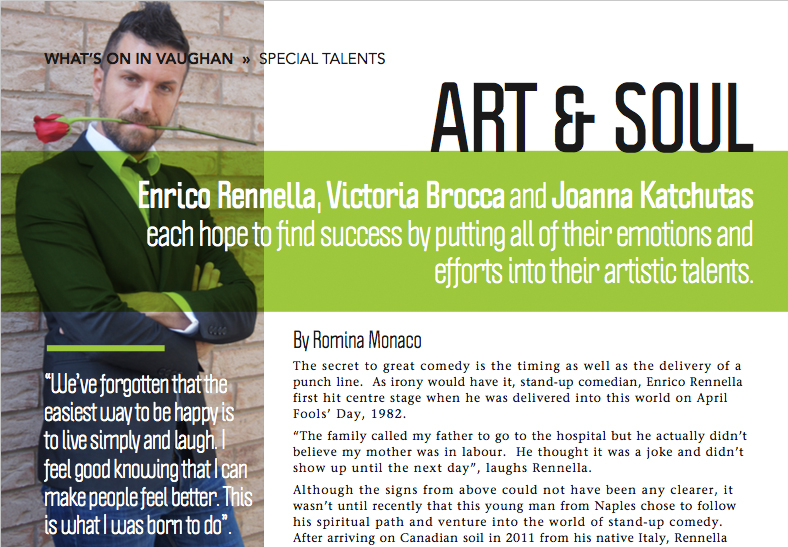 Enrico Rennella, Victoria Brocca and Joanna Katchutaseach hope to nd success by putting all of their emotions and efforts into their artistic talents.

The secret to great comedy is the timing as well as the delivery of a punch line. As irony would have it, stand-up comedian, Enrico Rennella first hit centre stage when he was delivered into this world on April Fools’ Day, 1982.

“The family called my father to go to the hospital but he actually didn’t believe my mother was in labour. He thought it was a joke and didn’t show up until the next day”, laughs Rennella.

Although the signs from above could not have been any clearer, it wasn’t until recently that this young man from Naples chose to follow his spiritual path and venture into the world of stand-up comedy. After arriving on Canadian soil in 2011 from his native Italy, Rennella has – in a relatively short period of time – managed to fill the theatre halls of the Greater Toronto Area, Hamilton, Windsor and Montreal. Modern and whimsical tales of a young Italian immigrant’s adventures in Canada bridges the gap between generations of Italian Canadians – where audiences relate to the mutual trials and tribulations of life as well as a collective immigrant story. These personal experiences along with his undeniable wit and boyish charm have made him one of the hottest tickets in town.

“I remember the first time I met a fellow Neapolitan here in Toronto”, Rennella tells a lively audience at the City Playhouse Theatre in Vaughan. “The first thing I did was check my watch to make sure it was still on my wrist!”

Poking fun at his culture is just one element of his comedy act. His flamboyant Neapolitan mannerisms reflect ethnic diversity while his fiery, satirical monologue inoffensively addresses social, religious and political issues. Rennella refers to himself as a one-man show, singing and dancing on stage while interacting with members of his audience. Having embarked on his journey as a professional comedian only two years ago, he has made remarkable strides.

“I’ve faced many obstacles and hardships in my life but once I chose to pursue this dream everything became effortless and doors just starting opening for me”, he explains. “I haven’t reached the pinnacle yet but I have grown a lot in two years. Things are going very well and the community has been very receptive.”

However, life hasn’t always been easy for Rennella, who had to learn about perseverance and self-reliance at too young an age. Born of Italian expatriates living in France, he left home at the age of fourteen, living homeless for a time on the streets of Paris. One year later, after working at various odd jobs mopping floors and washing dishes in local restaurants, he saved enough money to procure his first apartment. In his later teens he found more stable employment in retail and nightclub management.

“I basically grew up by myself.
I had to learn to survive and be self-sufficient. I didn’t have any guidance so I learned about life through trial and error” he explains.

Comedy became somewhat of an escape for Rennella. During his twenties his reputation for making people laugh landed him modest gigs in both Italy and France. However, a full-time career in the volatile entertainment industry only seemed like a distant, unattainable dream. Not until he came to visit relatives in Toronto did he realize that there was a large Italian community proud of its cultural identity and just waiting to embrace his particular style of comedy. Having now permanently laid his hat in the city of Vaughan, Rennella dedicates all of his time to this passion.

“I love what I do because I create my world – my own reality. Even as a small kid, I would entertain everyone around me. I’d stand on a chair and start telling a joke”, he says while reflecting back on his childhood. “Just before I go on stage I become very emotional because I can’t believe I have actually made this happen. I still feel like that little kid.”

His first show, Nu’Scugnizz’ A Toronto, which from the Neapolitan dialect translates to “An Urchin in Toronto”, was performed in Italian. Rennella has recently challenged his artistic ability by doing his first English- speaking engagement this past summer. We can expect more Neapolitan pageantry in his upcoming second show, L’Amore all’Italiana on November 15th and February 14th at Vaughan’s City Playhouse Theatre. This performance focuses on family, friendship and falling in love.

Rennella intends to perform across Canada and the United States adding that he would also like to bring comic relief to the masses by appearing in a television series.

Meanwhile, stirring the subconscious with her thought-provoking images is award-winning photographer, Joanna Katchutas, whose photographs echo the complexity existing within the realms of human emotion. While surrealistic, these works are a reflection of Katchutas’ own life experiences and personal evolution.

“Things change throughout the course of someone’s life. Whatever I am going through in that particular moment of my life is mirrored in what I create. Because I am always changing and evolving so does my work”, she explains.

Her collections were being shown at various exhibitions across the GTA long before graduating from the Ontario College of Art and Design in 2011. Recognized and celebrated for her numerous themed collections, she was given her first solo exhibit at the 2012 Vaughan In Focus Exhibition. Katchutas was awarded the Reserve Best in Show Award for her farcical “The Trapeze Artist: The Circus of Everyday Life Series” at a separate exhibit presented by Vaughan In Focus in collaboration with Vaughan City Hall.

When asked why she feels her work has made such a profound impact, she replied, “I like to build my set from the ground up and enjoy using various mediums such as metal, wood and sculpture in my photographs. For example, I created metal wings for the Element Faerys Series”.

The Multiple Clues Series, which sprang from her love of the board game Clue demonstrates how thought processes and emotions lead to choices, actions, consequences and ultimately – destiny. The collection’s “Miss Scarlet” piece won the People’s Choice and Reserve Best in Show awards at the 2009 Vaughan Juried Art Exhibition.

Katchutas’ freelance work includes photojournalism as well as private and commercial photography. She is also Curator of Exhibitions, Multi- Arts and Photography Projects for The Beaches International Jazz Festival, is co-founder of the Bang! Vaughan Arts Collective and participates annually in the Sunnyside Art Fair at Sunnyside Pavillion. As the official photographer for many provincial festivals, concerts and cultural events, Katchutas says that her schedule is quite full these days.

Fashion legend Coco Chanel once said that in order to be irreplaceable, one must always be different. Nothing rings more true for aspiring eighteen year-old fashion designer, Victoria Brocca. Having only just begun her first year at Ryerson University, where she is enrolled in Fashion Communication, this young woman’s one-of-a-kind creations are already a hot commodity. Edgy and bold, her modern designs parallel those of any seasoned couturier.

“I started making my own dresses and would wear them when I would go out. People were so amazed and started asking me to make customized clothing for them too”, explains Brocca who can already boast an extensive roster of loyal clients.

A recipient of numerous scholarship awards from Vaughan’s Façade Academy of the Arts, she was taken under the wing of the school’s director and founder Mina Spremulli. With Spremulli’s careful tutelage and mentorship she learned the art of sewing, fashion sketching and pattern design.

“I have the skills that I acquired at the Academy. Now I want to learn the business aspect of the industry”, she states confidently.

Regardless of her inexperience, she demonstrates a natural flair for business. She recently negotiated her first deal after being selected from a panel of candidates as the of cial designer of the Kermaxx Sweater, which will be launched within the next year by Kermaxx International – manufacturer of extreme sports products and sponsor of Motocross racing events. According to Brocca, this is only the beginning. She believes that top models will one day strut her trendy designs on the international fashion runways. Along with coordinating her own shows, she also plans on collaborating with distinguished and renowned designers.

Not surprisingly, Brocca has a knack for other art genres including painting, photography and make-up artistry skills. She is an ideal package, making her an outstanding asset to the fashion industry.

Uncommonly focused and disciplined for someone so young, Brocca is very clear about where she is headed.