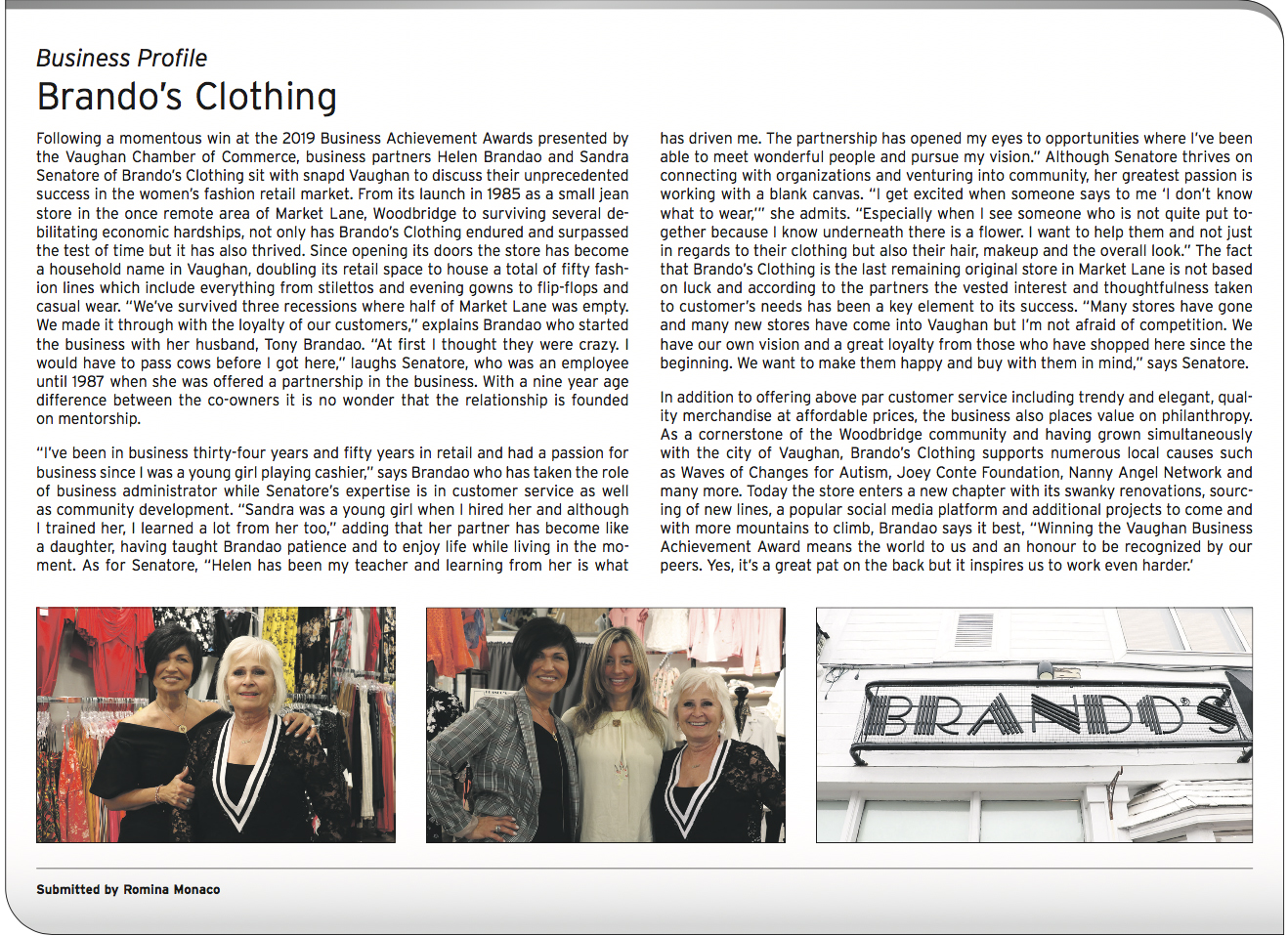 Following a momentous win at the 2019 Business Achievement Awards presented by the Vaughan Chamber of Commerce, business partners Helen Brandao and Sandra Senatore of Brando’s Clothing sit with snapd Vaughan to discuss their unprecedented success in the women’s fashion retail market. From its launch in 1985 as a small jean store in the once remote area of Market Lane, Woodbridge to surviving several de- bilitating economic hardships, not only has Brando’s Clothing endured and surpassed the test of time but it has also thrived. Since opening its doors the store has become a household name in Vaughan, doubling its retail space to house a total of fty fash- ion lines which include everything from stilettos and evening gowns to ip- ops and casual wear. “We’ve survived three recessions where half of Market Lane was empty. We made it through with the loyalty of our customers,” explains Brandao who started the business with her husband, Tony Brandao. “At rst I thought they were crazy. I would have to pass cows before I got here,” laughs Senatore, who was an employee until 1987 when she was offered a partnership in the business. With a nine year age difference between the co-owners it is no wonder that the relationship is founded on mentorship.

“I’ve been in business thirty-four years and fty years in retail and had a passion for business since I was a young girl playing cashier,” says Brandao who has taken the role of business administrator while Senatore’s expertise is in customer service as well as community development. “Sandra was a young girl when I hired her and although I trained her, I learned a lot from her too,” adding that her partner has become like a daughter, having taught Brandao patience and to enjoy life while living in the mo- ment. As for Senatore, “Helen has been my teacher and learning from her is what has driven me. The partnership has opened my eyes to opportunities where I’ve been able to meet wonderful people and pursue my vision.” Although Senatore thrives on connecting with organizations and venturing into community, her greatest passion is working with a blank canvas. “I get excited when someone says to me ‘I don’t know what to wear,’” she admits. “Especially when I see someone who is not quite put to- gether because I know underneath there is a ower. I want to help them and not just in regards to their clothing but also their hair, makeup and the overall look.” The fact that Brando’s Clothing is the last remaining original store in Market Lane is not based on luck and according to the partners the vested interest and thoughtfulness taken to customer’s needs has been a key element to its success. “Many stores have gone and many new stores have come into Vaughan but I’m not afraid of competition. We have our own vision and a great loyalty from those who have shopped here since the beginning. We want to make them happy and buy with them in mind,” says Senatore.

In addition to offering above par customer service including trendy and elegant, qual- ity merchandise at affordable prices, the business also places value on philanthropy. As a cornerstone of the Woodbridge community and having grown simultaneously with the city of Vaughan, Brando’s Clothing supports numerous local causes such as Waves of Changes for Autism, Joey Conte Foundation, Nanny Angel Network and many more. Today the store enters a new chapter with its swanky renovations, sourc- ing of new lines, a popular social media platform and additional projects to come and with more mountains to climb, Brandao says it best, “Winning the Vaughan Business Achievement Award means the world to us and an honour to be recognized by our peers. Yes, it’s a great pat on the back but it inspires us to work even harder.’