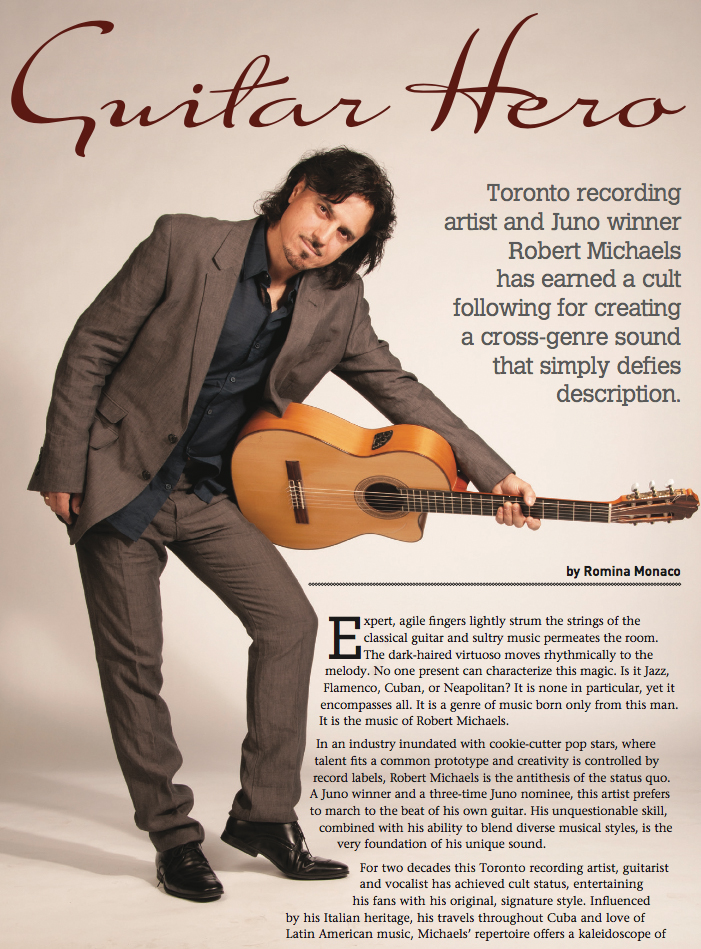 Expert, agile fingers lightly strum the strings of the classical guitar and sultry music permeates the room.  The dark-haired virtuoso moves rhythmically to the melody. No one present can characterize this magic. Is it Jazz, Flamenco, Cuban, or Neapolitan? It is none in particular, yet it encompasses all. It is a genre of music born only from this man.  It is the music of Robert Michaels.

In an industry inundated with cookie-cutter pop stars, where talent fits a common prototype and creativity is controlled by record labels, Robert Michaels is the antithesis of the status quo. A Juno winner and a three-time Juno nominee, this artist prefers to march to the beat of his own guitar.  His unquestionable skill, combined with his ability to blend diverse musical styles, is the very foundation of his unique sound.

“Whatever this gift is and wherever it’s coming from, I am only the messenger”, he implies.

For two decades this Toronto recording artist, guitarist and vocalist has achieved cult status, entertaining his fans with this original, signature style. Influenced by his Italian heritage, his travels throughout Cuba and love of Latin American music, Michaels’ repertoire offers a kaleidoscope of musical arrangements.  His noted instrumental guitar compositions are a fusion of Latin-Jazz, Flamenco-Cuban as well as Neapolitan-Spanish.  Besides being a Juno recipient he is also a platinum-selling artist (almost unheard of in the instrumental genre) who has also joined forces with several other celebrated musicians, songwriters and vocalists.  Through it all, he continues remain true to his art and cater to his loyal audience.

“I would rather play to a live audience than record an album.  The immediate interaction and the spontaneous energy that it creates are very exciting.” says Michaels.

Born in Toronto to Italian immigrants, some might say Roberto Michele Buttarazzi’s love of music stems from his pedigree.  His mother had a flair for the piano and his father the accordion. As a young boy in the early Sixties he returned to his parents’ native country, living for a time in the outskirts of Naples.  As a young bystander at weddings in his grandfather’s restaurant, he would listen in wonderment to famous Neapolitan songs.

“I think music is in the blood of the Neapolitan. Most Italian music known world-wide originates mainly from this region” explains Michaels.

After returning to Toronto he discovered his passion for the guitar. He played the instrument every moment he could, subsequently mastering his craft at Humber College. The young man continued to be inspired by individual artists and bands such as Led Zeppelin, Carlos Santana and Eric Clapton as well as the Jazz and Classical genres taught by his instructors.

Michaels’ signature sound came shortly after graduating college – born organically in the wine bars and restaurants of Toronto.  During his live performances in these locales, he began to instinctively meld together all his favourite musical styles. Unpremeditated and spontaneous, this new sound created a buzz and to Michaels’ surprise his music became a hot commodity.

“People were coming up to me after my show inquiring where they could purchase my music.” he says. “I asked them, “What do you mean? Just come back next week and I’ll be here!’” he laughs.

This unprecedented demand gave rise to his debut album, Paradisoin 1994. Without the endorsement of a major record label, Michaels achieved platinum status selling over 100,000 units nation-wide. In 1997 his second independent album, Arizona, earned him his first Juno nomination for Instrumental Artist of the Year. The publicity surrounding Michaels attracted the attention of Warner Music Canada who signed him on to create his third album, Utopia. During this period Michaels added another accolade to his list of accomplishments. His next release, Allegrowon a Juno in 2003 for Best Instrumental Album.

All this success raised the eyebrows of several acclaimed artists who now wanted to work with him. Collaborating in his self-titled album was Grammy Award winning Jennifer Warnes, as well as Luba, jazz singer-songwriter Coral Egan and many others. The compilations that followed, such as the noted Cubamenco album showcasing his particular blend of Cuban and Flamenco music, continued to be consistent with his trademark.  In respects to his heritage, Michaels has now come full circle and is promoting his latest album entitled Via Italiawhere Spanish guitar renditions of Caruso and Turna a Surrientoflow magically from his fingertips.

He continues to remain connected to his audience. Recently, his performances in Ottawa, the Markham Theatre as well as the Mississauga Living Arts Centre have received stellar reviews.  His extraordinary talent has even taken him south of the border.

“I’ve been travelling to the United States, writing my own symphony arrangements and scores.  It’s exciting to hear a 100-piece orchestra play the music you’ve created” he says.

Notwithstanding his roster of impressive accomplishments, what truly matters to Robert Michaels is the effect his music has on others.

“What really blows my mind is when I hear someone tell me how one of my songs or albums has impacted their life. Just hearing that means more to me than anything else.”