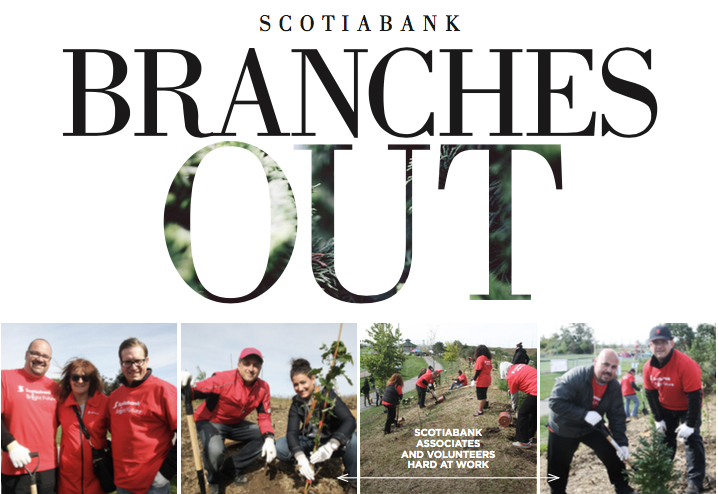 “Scotiabank has been very active across the country and is getting involved with environmental initiatives. We believe that within the City of Vaughan we’ve helped create a unique program which deals with these issues.”

In the last several years there has been a visible and significant change to Vaughan’s urban canopy. Problems resulting from the emerald ash borer beetle infestation which destroyed millions of ash trees across North America, as well as the devastation of 2013 ice storm have left some areas stark and barren. Concerned and ready to fight back, local Scotiabank associates are rolling up their sleeves, slipping on their gardening gloves and with shovel in hand are replenishing and further enhancing the city’s original landscape.  “Scotiabank has been very active across the country and is getting involved with environmental initiatives. We believe that within the city of Vaughan we’ve helped create a unique program which deals with these issues,” explains Jason Polsinelli, Senior Wealth Advisor at ScotiaMcLeod and the visionary behind the development of the Scotiabank Branching Out Program in Vaughan. This newfound legacy rooted in beautifying the cityscape and preserving the environment was celebrated this past autumn as a devout team of individuals exercised their green thumbs on the grounds of Concord/Thornhill Regional Park.  Partnering with the City of Vaughan and the Living City Foundation, volunteers from Scotiabank Commercial Banking, Scotia Wealth Management as well as Universal Care planted $30,000 worth of trees along the park’s pathways and boulevard.  “This second annual event was a real success. Our 30 volunteers along with our landscaper – Geoscape Exterior Designs – and City of Vaughan staff planted 280 trees and shrubs. I would sincerely like to thank all our sponsors and volunteers for their contributions in helping beautify Vaughan,” said Scotiabank Branching Out Committee Chair, Mario Cutone. Also expressing his gratitude was Mayor Bevilacqua who, in light of the notorious ice storm and the limited replanting resources allotted to city parks and boulevards, has been a strong advocate for sustainability and environmentally-based initiatives. “This event showcases the great volunteer spirit of our business community and speaks to the commitment both businesses and citizens have to the prosperity of this great city.”